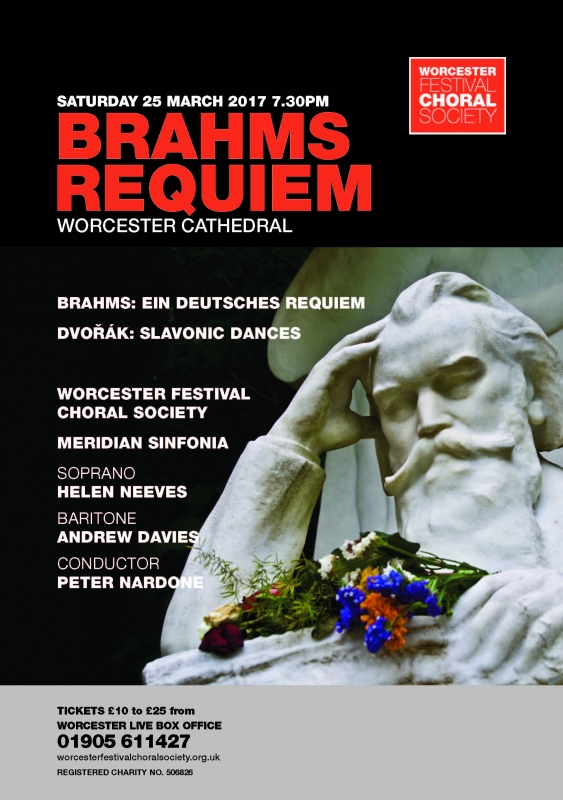 A memorable, stirring choral and orchestral concert at Worcester Cathedral that promises to be one of the highlights of the Midlands' spring music calendar.

One of the Romantic period’s leading composers, Johannes Brahms wrote arguably his greatest choral composition, Ein Deutsches Requiem (A German Requiem), as a comfort for those who mourn and who feel the pain of the death of others.

He began writing the work in 1865, the same year he experienced the painful loss of his mother, and viewed it as a humanist piece rather than overtly Christian. This passionate, large-scale work for chorus, soprano and baritone soloists and orchestra creates a tapestry of musical solace, peace and hope – perhaps the most comforting, humane requiem ever written.

The Slavonic Dances (Op.46) by Czech composer Antonin Dvořák are a series of exciting, folk-filled orchestral pieces composed in 1878.
Lively and full of national character, the dances – originally composed for piano four hands – established Dvořák’s reputation and today are among his most memorable works, occasionally making appearances in popular culture.

Supporting Worcester Festival Choral Society - many of whose members sing in the world-famous Three Choirs Festival - are the Meridian Sinfonia.
The acclaimed soloists (pictured) are Helen Neeves (soprano) and Andrew Davies (baritone).
The concert is conducted by Peter Nardone.
Previous Concerts

To see the old flyers from previous concerts click here