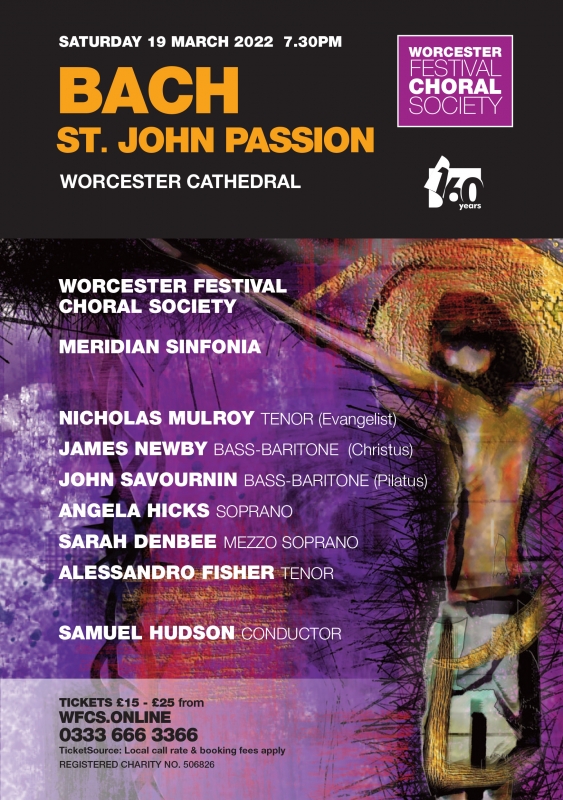 Fittingly complemented by the magnificent setting of Worcester Cathedral, the Chorus will be joined by six, acclaimed soloists: including renowned tenor Nicholas Mulroy as Evangelist (below, far left), who performed the role at the BBC Proms 2017 to critical acclaim. Joining him (below, second left to right) are bass-baritone James Newby as Christus and bass-baritone John Savournin as Pilatus, as well as tenor Alessandro Fisher, countertenor James Laing (replacing Sarah Denbee due to illness) and soprano Angela Hicks. Accompanied by the superb Meridian Sinfonia orchestra, the concert will be conducted by Worcester Cathedral's director of music Samuel Hudson.

Concert-goers will also be in for a special extra treat on arrival at the Cathedral. As the audience arrives they will be able to hear the Guild of Bellringers performing Grandsire Caters on the half-muffled harmonic minor peal of bells - a haunting combination that is unique to Worcester Cathedral. The great, four tonne bourdon bell will also be tolled at the end, as a solemn scene-setting for this St John Passion performance.

Book your tickets for this thrilling musical evening HERE today.

Dates for your diary