Hallelujah! WFCS is back on song after Covid and Storm Arwen 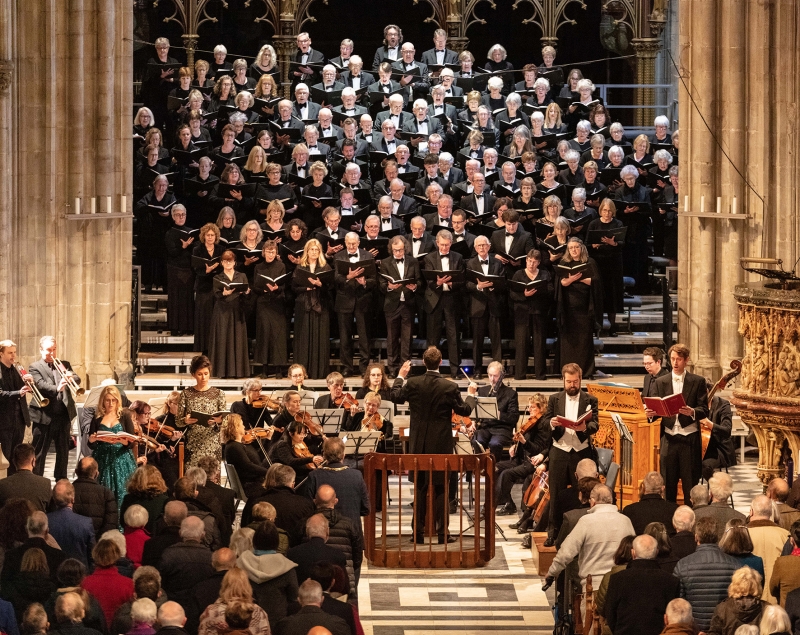 Worcester Cathedral rang out to the sound of 150 choral voices for the first time in two years on Saturday 11 December 2021, when Worcester Festival Choral Society returned for its first performance since the pandemic began.

An audience of around 500 music lovers from across the region gathered to hear WFCS perform Handel's glittering oratorio Messiah. Since the Society's previously planned season-opener of Fauré's Requiem had had to be cancelled two weeks earlier due to storm damage at Worcester Cathedral, the Messiah concert by default also marked the start of the Society's historic 160th season.

Ben Cooper, chairman of Worcester Festival Choral Society, said: “We were incredibly excited to bring this wonderful work back to Worcester after such a long break, especially as our much-anticipated autumn concert at the end of November had to be cancelled at the last moment. It was amazing to sing in the Christmas season and give music-lovers a truly thrilling evening!”

Written almost 280 years ago, Handel’s Messiah has become one of the world’s most popular choral works. When King George II attended the work’s premiere in 1742, he is said to have been so moved by the Hallelujah chorus that he rose to his feet – a tradition that audiences continue today. The oratorio is also packed with other powerful choruses and arias that many people will know from radio, TV and film.

Established in 1861, and closely associated with Sir Edward Elgar in its early years, Worcester Festival Choral Society’s auditioned singers are selected from across the County. Today the Society stages three major concerts in Worcester Cathedral each year, performing some of the world’s ‘great choral works’. Many of its members also form part of the renowned Three Choirs Festival chorus.

Continuing the annual tradition that has been part of Worcester Festival Choral Society’s rais... read more

One of the most significant classical choral works ever written is to be performed by 150 voices and... read more

Amateur singers of all kinds can learn not one, but two, much-loved choral works at a special &lsquo... read more